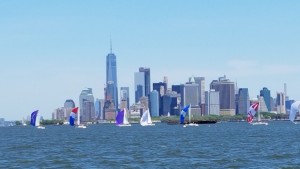 Continuing a NYC and J/105 tradition, Fleet 10 in conjunction with the Liberty Yacht Club hosted the seventh annual Manhattan Regatta in the amazing racing venue of New York Harbor. Nine J/105s fought it out in eight races over two days in courses set by PRO Vicky Neiner between Lady Liberty and the Brooklyn shoreline. The regatta started with a light air first race in a course paralleling the Staten Island Ferry path where the wind shifted 180 degrees. At one point, spinnakers were simultaneously used in opposite directions. After this slow start, a steady sea breeze kicked in from the south necessitating a course reset to the Brooklyn shore. Three races were then completed with tight competition, leaving area favorite Paul Beaudin’s Loulou first with Ann and Gary Myer’s Magic and Mark van Schalkwyk’s Circe close behind. Paul is currently the area’s hot boat after winning the American Yacht Club Spring Regatta. Additionally, the Perth Amboy, NJ-based boat Escapade skippered by Al Rothschild won the single day PHRF division. At the end of the day, all the competitors returned to the Liberty Landing Marina to enjoy the traditional BBQ aboard the Liberty Lightship under the Manhattan skyline. Sunday featured a steady mid-teens southeast breeze and bright sunshine. Another course was set up along the Brooklyn shoreline under the gaze of Lady Liberty. The competitors enjoyed four races with Magic constantly nipping at Loulou’s heels in every race. Both split the bullets while Magic gained ground in races they did not win. An exhausted Loulou survived the eighth race of the weekend to win their first place Lady Liberty trophy. Magic and Circe completed the podium positions. Thank you LYC members Jim Chambers and Huhnsik Chung for generously providing their boats and time for RC. Also to Fleet 10 officers David Spence and Paul Zajac for once again organizing a great spring event. Complete results can be reviewed in the following Yacht Scoring link https://yachtscoring.com/emenu.cfm?eID=4167.