After five days of hard racing at Block Island Race Week, on Friday, June 23, there were 16 ecstatic winners and an equal number of disappointed runners-up. One of the happier crews was located at the far end of the Champlin’s dock aboard the J/105 Good Trade, owned by the husband-wife team of Bruce Stone and Nicole Breault. Good Trade sailed impressively all week en route to capturing the J/105 New England Championship, winning five races and placing second in two others in posting a low score of 12 points. That was seven better than runner-up Eclipse (Damiam Emery, Shoreham, NY), and earned Stone and Breault the prestigious Everett B. Morris Memorial Trophy. First awarded in 1967 and rededicated in 1991, the Morris Memorial Trophy is presented to the Block Island Race Week entry that wins its class and, in the judgment of the race committee and Storm Trysail Club commodore, put forth the Best Overall Performance. "We were on fire, really in the zone," Breault said. "We sailed the boat really well and minimized our mistakes." Stone steers while Breault calls tactics on Good Trade, which they bought last May from the Massachusetts Maritime Academy. The couple resides in San Francisco and races a J/105 named Arbitrage on the West Coast.

"We’ve won five of the last seven regattas we’ve entered so I’d say we’ve been on a bit of a roll," Stone said. "We’re having a really strong season so far and hope to keep it going." Marc Acheson (headsail trimmer), Bill Higgins (bow), John Sahagian (mast person) and Casey Williams (jib trimmer) complete the crew on Good Trade, which opened the regatta with a third then reeled off a steady string of firsts and seconds the rest of the way. "Our crew work is so solid that I can call for any type of maneuver at any time and not worry one bit," Breault said. The fleet also featured team Rigadoon, owned by Bill Riggs and skippered by his 20-year-old grandson Kyle Riggs. Kyle finished ninth in his first regatta skippering the boat. The oldest crew member was 21 years old. In the J/105 Class overall: 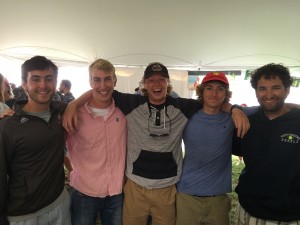