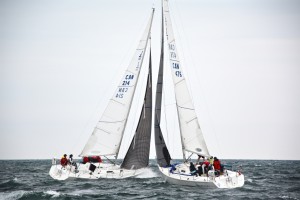 This regatta was heavily promoted by ABYC and supported by Fleet Captain Doug Bullock with some impromptu assistance from Team Sonic’s Flip Cup Challenge experts Michelle Skutelsky, Emily Sale and
Kira Fulford. ABYC worked hard to organize a great event and did it with help from the old style reggae tunes of the Errol Blackwood band. Fleets included J80, J27, J35 on Alpha course and the 18 boat strong J105 fleet with a mix of J109/120/33 in a PHRF division on Bravo adding up to total 42 boats. The shore
side effort promised a great event.

Top contender Mandate had its usual crew, but Hey Jude was short one doctor and long one Jarvis with Scott C. taking the helm. It promised to be a good challenge between these two and Jamaica looked strong but no Jorge. Usual was back in strength with Johnny Wright on the helm. It was promised to be tight racing.

All the J105’s were well prepared and raring to go but woke up to a Saturday forecast of absolutely no wind until maybe late in the afternoon. Guess what? That’s exactly what happened as the fleet sat idle until a wind line showed up around 2PM. The patient PRO hung in wisely and managed to get off 2 short races in a light but sailable shifty breeze which saw the fleet sailing much later into the afternoon than normal. Key to the race was as usual, getting off the line especially with 18 boats in a light breeze. Mandate took the first race but finished 2nd behind Hey Jude in the second. JMC was consistent with two
3rds finishing the first day in 3rd. Al Megarry helming Starcross had a solid day in 4th with Usual Suspects taking 5th place. Three boats (Sonic, TrueBlue and Voodoo Magic) were a little too eager at the start of the 2nd race and found out on shore they were scored UFD which dropped them back out of any chance of contention.

The shore side party was fantastic reminding me of some of the club parties in the 80’s and 90’s when sailing attracted many more boats and sailors ashore. Michelle ran a fun flip cup event, the club sold lots of great rib-chicken dinner combos. All was good.

Sunday’s forecast proved equally correct but completely different with a strong easterly wind overnight and current from around 50-70 degrees building throughout the day with 16 to 18 knots solid which created quite a bump and wave condition by days end. The PRO remained determined to complete the scheduled three races which were long and challenging. It ended up that the regatta winner was determined by the race 1 results as both Hey Jude and Mandate each had a 1st and 2nd on the remaining four races. So Mandate takes overall, Hey Jude 2nd and Usual Suspects sailing a really solid 2nd day (4, 3, 3) to overtake Jamaica who fumbled the ball (7, 4, 6). Mike Mountford’s Live Edge remained consistent to take 5th and Sentient punched above her weight level taking 6th. As a Sentient team member, the call was to stay away from other boats and sail our own race. We missed getting off the line but made it up by doing early takedowns and controlled gybes working the wind as best we could with a lighter weight and strength crew.

Noteworthy sails by Team Endeavour who tanked in the light stuff on day 1, but took off in the breeze with a (3, 5) but a retirement from the last race pushed her back. Good solid sailing on the first 2 races though!

Some observations (mine);
1) It was interesting to see that many of the J105’s passed the “faster” PHRF boats who had
started 6 minutes ahead. J105’s rock with the breeze up!
2) It paid to gybe early. Not only could you work down the waves taking advantage of the larger waves offshore but when you gybed back, the bigger waves helped you surf faster and farther.
3) Teams that were more conservative taking down spins early were faster around the gates and better prepared upwind. It’s tempting to leave it late but any delay was disastrous.
4) Some lighter crew boats like Sonic and Jamaica still performed well in the big breeze.

Next event is the National YC, August 12 & 13th after the Long weekend. Enjoy!