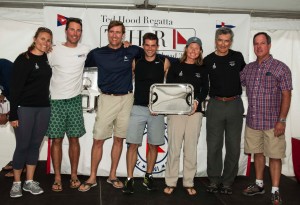 With three days of racing with winds below 10 knots, the J/105 team from San Francisco on Good Trade, skippered by Nicole Breault, dominated the Marblehead fleet with a 1, 3, 5, 2, 1, 1, 1 scoreline for 14 points. Her team consisted of Dave Marshall at bow, Halsey Richartz at mast and tactics, Casey Williams at pit and jib trim, Jamie Ewing at main, and co-owner Bruce Stone at spin trim. The top local team skipped by Fred deNapoli on Allegro Semplicita was 13 points behind with 27 points, followed by Matthew Pike and Dave Nelson's Got Qi with 35 points. Nicole and Bruce are on a roll, having won three regattas on SF Bay (St Francis YC Spring One Design, SF Bay J/Fest and SF Yacht Club Resin Regatta) plus Cedar Point One Design, Storm Trysail Block Island Race Week, Buzzards Bay Regatta and now the Ted Hood Regatta, the latter two skippered by Nicole, who commented, "It was great to get back to Marblehead and its picturesque harbor and its strong racing heritage. I remember coming here to race in the Bemis championship in the 80s and the International 420 North Americans in the early 90s, so it was fun to return in a big boat and run into many friends from those years. The hospitality was terrific, and we plan to be back in a few years for the J/105 North Americans." For complete results, visit https://www.yachtscoring.com/event_results_cumulative.cfm?eID=3000.