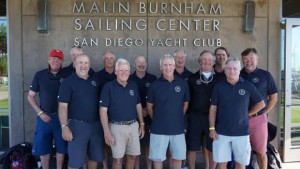 Dave Perry kept his scores in the top 6 on the final day of the 37th edition of the International Masters Regatta in San Diego to take the title over the 12-boat fleet of notable and notorious skippers. After finishing the first day tied for the lead with Ted Lacey, Perry and his team of John Reiter, Alex Camet, Chuck Sinks, Chris Busch and Al Pleskus took over the lead on day two and closed out the final four races Sunday on the venue in South San Diego Bay east of Coronado Bridge. This is Perry’s first win in the event where the skipper must be 60 years and the crew are at least 45 years in 2018. Winds were on the lighter side for the round-robin fleet racing format in supplied J/105s. Report from San Diego Yacht Club: When asked about the most important aspect of his win, 5-time Match Racing Champion Dave Perry responded, "The day I put together my crew." Perry had several local SDYC members return from last year and added previous friends he has sailed with in the past. "When they all said yes was the best day of the regatta." Perry came to the San Diego Yacht Club from Connecticut where he sails at Pequot Yacht Club. He is known all around the country as an expert on the Racing Rules of Aailing and as a Match Racing guru. Perry is a member of the Sailing World Hall of Fame and has dedicated much of his career volunteering with US Sailing, currently serving on its Board of Directors. He is a true ambassador for the sport of sailing. "I’m at the [San Diego Yacht] Club a lot but I’m usually here to teach, not to race. Similar to match racing, there were so many situations just one on one in this regatta... like coming into the start and coming into the windward mark. If you teach something, you’re always thinking about it. I have a good visual image of the race course," Perry explained. The breeze for day three started off similar to days one and two with light winds from the south. The morning’s foggy skies burnt off just in time for the regatta, but made for some unique photo opportunities on the way out to the course. The wind picked up and peaked at 9 knots midday, again making for ideal racing conditions on South San Diego Bay. Two new sailors to the International Masters Regatta also proved themselves with smart, intense sailing this weekend. Andy Roy, coming from Royal Canadian Yacht Club, started off day one in fourth place and moved one step up the ladder each day, finishing in second place and earning his spot on the podium. California Yacht Club’s Bill Peterson saw a similar climb finishing in third place by the end of the regatta. Both sailors are new to the J/105. Roy returned to the docks after the races thrilled with his position. "We’re really blown away. I’ve never been in a J/105 until the regatta. I owe this success to the crew; these guys are really good and they made it all happen. It was a bit of a learning curve for me. I learned a lot the first day about handling the boat and picked it up the second day. If I get invited again, I’ll absolutely be back." For complete results, visit https://sdyc.org/assets/results/results18/masters18_res.htm.