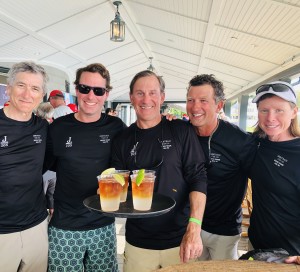 Good Trade, led by Nicole Breault and Bruce Stone, won the J/105 North American Championship hosted by Corinthian Yacht Club in Marblehead, MA from September 5-8. Conditions were considerably lighter after Hurricane Dorian passed by the day before, with winds from the west. Taking the first race of the fourth and last day of competition (race seven) was Ken Horne on Final Final, followed by The Usual Suspects in second (who slipped to eighth after a penalty) and Californian boat Ne*Ne in third. Charlie Garrard's Merlin took fourth. The final race of the day made all the difference, with Good Trade taking first place, Merlin second, and Terry Michaelson and The Usual Suspects in third. Overall, the 2019 J/105 North American Champion is Good Trade, followed by Final Final in second, and local favorite Merlin in third. It was a hard fought regatta over four days, with some great racing and sportsmanship throughout. Photos are available on the J/105 Class Facebook page, and complete results may be found at https://yachtscoring.com/emenu.cfm?eID=6023. This was the second J/105 North American Championship for co-owners Stone and Breault who also won in Larchmont in 2009. The team consisted of Bruce Stone, Halsey Richartz, Bill Higgins, John Sahagian, Nicole Breault and Stu Johnstone (absent from photo (photo credit Patti Kelley).