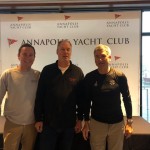 Annapolis Yacht Club hosted the 2019 J/105 Chesapeake Bay Championship, a warm-up for the 2020 J/105 North American Championship being held there at the same end-of-October weekend, drawing a strong turnout of 19 locals plus one out-of-town team, Good Trade from San Francisco. In light and shifty conditions, Fredrik Salvesen and Cedric Lewis on Mirage won the first day with two bullets and a second for four points, followed by Bruce Stone and Nicole Breault on Good Trade with a bullet, a second and a fifth for 8 points, and AJ Libby on Doghouse matching Ben DuPont on Control Alt Delete at 17 points, with Doghouse ahead on the tie-breaker. Andrew Kennedy’s Bat IV and Carl Gitchell’s Tenacious were close behind with 18 and 20 points respectively. Severe weather set in on Sunday and seeing a chance of tornadoes, the Race Committee canceled, so Saturday’s finishes stood and Mirage is the 2019 J/105 Chesapeake Bay Champion. Full report from AYC at: https://www.annapolisyc.com/default.aspx?p=.NET_ArticleView&tview=0&plugid=1077771&ssid=332130&qfilter=RSC21621&itemID=312423